Prologue -The origins of pottery-

The Journey Starts at Mt. Kishidake

A narrow road winds through rice fields nestled between mountains. Fog gathers around the mountain’s foothills, adding to the quietude of the scenery. Follow the river here deep into the valley and you will come across the almost-hidden remains of the Kishidake kiln. This area in Karatsu City, Saga Prefecture is known as Kitahata. This area was once ruled over by the warlord Hata. In the 1580s, his forces brought potters back from Korea, which Hata used to open a kiln. This first kiln was the forbearer of Karatsu ware and ultimately Japan’s porcelain wares.

Invasions of Korea and the Daimyo of Hizen

“First Ido, second Raku, third Karatsu” is a popular refrain used to describe the favorite tea implements of old tea masters. There is no doubting that Karatsu ware was admired by the region’s surrounding daimyo lords. The leaders of Hizen sent soldiers to the Japanese invasions of Korea that occurred between 1592 and 1598. The soldiers returned from their campaigns with many potters in tow. Regions began opening their own kilns as they competed to develop the best wares. Meanwhile, the warlord Hata had his estate confiscated by the daimyo lord Toyotomi Hideyoshi, and so the potters of Kishidake dispersed into the neighboring regions of Hizen, taking their Karatsu ware techniques with them.

In this way, the pottery of Hizen, featuring techniques brought from Korea and the use of multi-chambered climbing kilns, contributed to the development of other pottery industries also taking shape in the area at that time. Soon after, major developments would change the story of pottery in Japan forever. A potter working for a minister of Naoshige Nabeshima, the founder of the Saga Domain, discovered some high-quality porcelain clay in the Izumiyama region of Arita. His name was Sanbei Kanagae (also known as Yi Sam-pyeong) .

Site of the Kishidake Kiln
It is thought this site was used to fire wares using pottery techniques originating in Korea and China.

Site of the Nakano Kiln
It is thought Shigenobu Matsura of the former Hirado Domain brought 100 master potters, including Koseki, from Korea to open this kiln.

The potters who carry on the traditions of Karatsu ware make the most of the coarse clay, creating simple forms that still possess a depth of expression.

Nakano wares made at the Nakano kilns in Hirado. The patterns painted using gosu compliment the unique textures on the stonewares.

Episode 1: The Birth of Japanese Porcelain
-Following in the Footsteps of the Porcelain Founder-

The Discovery of the Izumiyama Clay Quarry

Izumiyama can be found in Arita Town in Saga Prefecture’s Nishimatsuura district. The awe-inspiring, wide-open expanse of the Izumiyama clay quarry tells of its vital role over the past 400 years of history. One wonders what this clay quarry looked like when Yi Sam-pyeong stumbled across it in the 17th century. The base material of porcelain was called “porcelain stone”, but in some regions including Hizen, it was called toseki, meaning “pottery stone”. Yi Sam-pyeong would use the clay from Izumiyama to help build Japan’s first kiln dedicated to porcelain, which would become the foundation of the industrialization of Arita ware. The other domains in the region would also soon find similar resources to excavate for their own wares, propelling Hizen into a new era of pottery.

The Origins of the Art of Porcelain

Most early Japanese porcelain had only simple “sometsuke”, or underglazes, on their cobalt blue surfaces. Among this almost incomplete-seeming simplicity, some have patterns found in similar products in China. Many had irregular shapes and uneven underglaze coloring. However, white, glossy, strong porcelain, which was both functional and decorative in the Japanese aesthetic, was also developed.

Izumiyama Clay Quarry
The jagged faces of this pit tell of the massive quantities of rock excavated from this quarry.

Large Lobed Dish with Underglaze Cobalt-blue Design of Landscape
[Nationally-important Cultural Property]
Gift of Kichiro Imaizumi, in the collection of the Kyushu Ceramic Museum
This sometsuke-style piece was fired at the Yanbeta kiln in Arita sometime in the 1640s-1650s. This notable work displays the technical innovation of Arita porcelain methods.

Tozan-jinja Shrine
The torii gate, made of porcelain with an elaborate, cobalt-blue karakusa pattern, is an impressive sight to behold. The statuary, water vessels, and fencing at the shrine is also made of porcelain.

Episode 2: Talent Blossoms as Pottery Shines
-A journey among the pottery of Saga and Nagasaki-

The “White Jewels” Begin to Shine

About 30 years after porcelain began being made in Arita, the first-generation Kakiemon, applying techniques brought from China, succeeded in firing Japan’s first ceramics with overglaze. The white base of the porcelain becomes a canvas for painting colorful designs, allowing for a range of expressive patterns previously unseen on pottery or wooden utensils. The availability of wares that could be paired with seasonal dishes appealed to the Japanese sensibility of hospitality, which supported the development of a more creative food culture.
Around the 1660s, the domain kiln of the former Saga Domain was moved to Mt. Okawachi in Imari and began making porcelain intended for tributes, without regard to production costs. Over the centuries, the Saga Domain-owned kiln produced formal porcelain representative of its status as a domain kiln until the abolishment of the domain system in 1871. Styles included “Ainabeshima” with delicate linework, “polychrome Nabeshima” with red, green, and yellow overglaze on a cobalt blue sometsuke background, and “Nabeshima celadon” with thickly-applied glaze for rich blue-green colorings.

From Tributes for Nobility to Everyday Wares

In the early 17th century, tests began to produce porcelain wares in the Nakano region of the former Hirado Domain. Then, the potters of the domain relocated to Mikawachi, which was already being used for production. An official kiln system for the former Hirado Domain was established. Porcelain stone, or toseki from around the region such as Ajiro Toseki and Amakusa Toseki, was used to pursue even whiter, more intricate porcelain wares. Mikawachi soon became known for the high quality of its delicate sometsuke-style wares. They featured intricate techniques with translucent surfaces as thin as eggshells, openwork with lively lattice and flower petal patterns, chrysanthemum motif decorations, and relief work. Their dining wares exported to Europe at the end of the feudal era were highly regarded.
Around the end of the 17th century, largescale production of pottery was underway in the Hasami region of the former Omura Domain. Simple porcelain Hasami wares known as “Kurawankade” spread throughout Japan, greatly contributing to the daily use of porcelain by the general populace.
Porcelain production in Ureshino, which was separated from Takeo and Hasami by mountains, began soon afterwards. Polychrome overglazed ceramics were also produced in the Yoshida district, with some being exported to southeast Asia. At the beginning of the 18th century, simple sometsuke wares were also being produced in the Shida region. Taverns bustled along the trade route established to bring goods from Shiotatsu, which connected to the Ariake Sea. In this way, a ceramics industry that reflected the motives of each of Hizen’s domains grew and spread throughout Japan’s markets.

The Kakiemon style, which came to be known as Nigoshide, features an innovative execution of an asymmetric overglaze design set against a milk-white background that makes effective use of white space.

Dish with Underglaze-cobalt-blue and Overglaze Polychrome Enamel Design of Japanese Wagtails
In the collection of the Kyushu Ceramic Museum
Polychrome Nabeshima ware like this was created by masters using only the finest materials who worked at the domain kiln at Mt. Okawachi.

Tripod Dish with Underglaze Cobalt-blue Design of White Herons
[Nationally-important Cultural Property]
In the collection of the Kyushu Ceramic Museum
This masterpiece in the Ainabeshima style was made in the domain kiln at Mt. Okawachi between the 1690s and 1710s.

<Yoshida Ware> Large Dish with Overglaze Polychrome Enamels Design of Split Pagoda
In the collection of the Kyushu Ceramic Museum
In the early Edo era, polychrome overglazed ceramics were made that imitated Chinese Swatow ware. 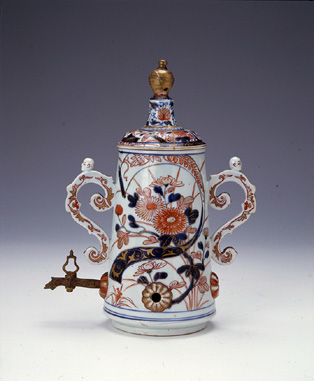 Epilogue
Offering Thanks for Pottery and Looking Towards Its Future

The pottery of Hizen was born out of the motives of the region’s domains and their many potters who applied techniques brought from Korea. Hizen had the necessary porcelain stone, firewood, and river water, as well as the manpower to bring it all together and develop the foundations of an industry. Every year, ceremonies are held at the Ceramic Founders’ Festival and Potters’ Tools Memorial Service to commemorate the industry’s 400 years of achievements and to pray for further successes. By recognizing the achievements of their forbearers, these communities can forge a path into the future. These heirs face the challenge of carrying on skills passed down over generations while innovating new approaches to their craft. They will undoubtedly apply their energy and vitality towards realizing new possibilities in their pottery.